Why invest in Vietnam’s private hospitals? 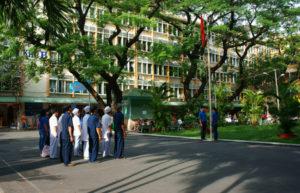 ~150   Number of private hospitals in Vietnam

$2Bn   Spent on treatment abroad by Vietnamese patients each year

Why invest in Vietnam’s private hospitals?

Tax incentives: Foreign entities are entitled to a corporate income tax rate of 10%; tax exemption over the first 4 years of a project and a 50% subsequent tax break in the following years

Premium ROI: While most private hospitals have aimed at overseas workers and families of foreign-employed Vietnamese citizens, there is a five-folds increase in the middle class sector in the country. It is also estimated that the country has one of the world’s fastest growing wealthy segment. Many foreign investing firms are looking to capitalize on this and have been paying a premium to acquire majority stakes in hospitals. In 2013, India based Fortis Healthcare sold its entire stake in Hoan My Medical Corporation for a premium price of $80Mn to Viva Holdings Vietnam.

Government support: In its attempt to attract foreign investors, the government is allowing unrestricted entry for qualified foreign doctors to practice in the country.

Growing medical tourism: With procedures priced at only one-fourth the cost as compared to other foreign countries; and improved success rates, medical tourism in the country has propelled measurably. According to the Ministry of Health, medical tourism yielded over US$1 billion in 2014. Thus business environment for high-tech hospitals is expected to be favorable; attributed to increasing number of expats along with surging number of medical tourists each year

It is anticipated that with the rapid growth of middle income groups in Vietnam, the patient pool demanding high quality healthcare will increase. About 8-9 million of the Vietnamese population may fall in this bracket, thereby making a good business case for hospitals looking for expansion in the country. Of the ~150 private hospitals, many need a structural reorganization and operational streamlining to improve their bottom lines. Investors can capitalize on such hospitals by bringing in international expertise of hospital management while potentially harnessing high ROIs in a high growth market.